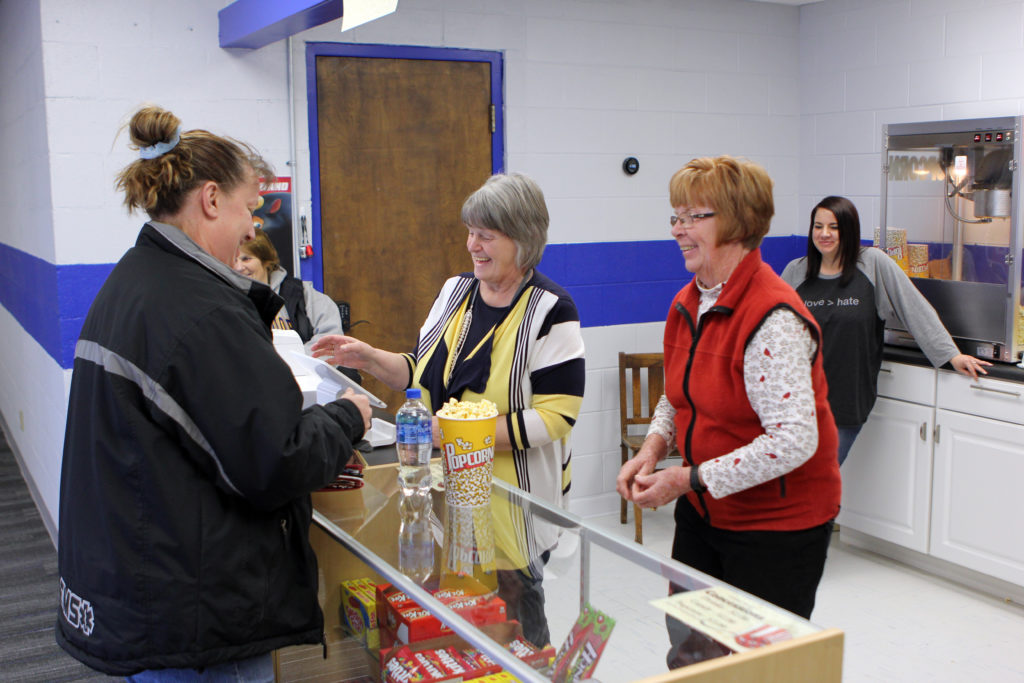 Jordan Huether didn’t purposefully seek a leadership role in the renovation of his community’s theatre – he just realized he could help, and started helping.

Huether “grew up all over the place, but went to high school in Martin, South Dakota” (Huether, Personal Interview), a city of about 1000 people, just 48 minutes northeast of Gordon. In 2010, he graduated from South Dakota State University with a degree in Electronics Engineering, and moved back to Martin to help his father at the newspaper there while he looked for another job. Shortly after, Jordan’s father bought the Sheridan County Journal Star in Gordon, NE, and sent Jordan there to run the paper. Says Huether: “My wife and I fell in love with the community and decided to stay, buying a house in town that summer (2011). We actually purchased the paper from [Huether’s father] January 1 of this year.” (Huether, Jordan; Gordon Theater Blog).

Gordon, NE is city of about 1600 people in the panhandle of the state, right at the crossroads of US highway 20 and State Highway 27. It’s had movie theaters since at least the early 1900s, though they’ve burned down several times. In the 1950s, a theatre was built in the place where the Gordon Community Theatre now stands.

It burned down in the 60s, and in the late 60s the Gordon Community Development Corporation was formed to build a new one. By 1970 a new theater was built, and changed ownership a number of times, lasting well into the 2000s.

In about 2010, however, the theater closed and fell into disrepair. After a few years, the Community Development Corporation regained control of the theatre, and held a public hearing to figure out what to do about it (Brant, Lauren; The Power of Community…). 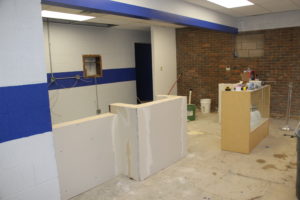 The lobby of the theater, torn down and ready to be rebuilt

Mr. Huether was at this hearing, covering it for the Sheridan County Journal Star, the newspaper he worked at. While covering the meeting, Huether realized he could help with a lot of the technical aspects of the theatre:

“When I was at college I worked at what was called State Tech, where I helped do all the live sound when bands would come…or when there were presentations…so I was pretty familiar with all of the equipment, with speakers and projectors…so I started looking into it…and I think they were budgeting $100k just for the projector, $200k just for the audio video stuff…I found some different things…cheaper things and better things, and just kind of kept finding more things that I could help them with. They asked me to join the board, and eventually they just asked me to be the president” (Personal Interview).

Huether became president of the board in 2015, and drew up a business plan for how they were going to renovate the theatre, and started passing it out. At this point, it was clear that the community wanted the theater to be a non-profit, community-volunteer theater, so they were going to need a lot of contributions from the community, both in money and in man-power. 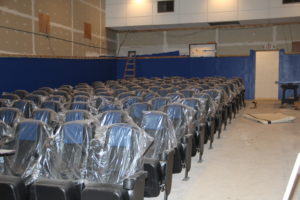 Seats ready to be installed in the theater

Fortunately, the community stepped up to the challenge.

“The Mustangs Committed (a group of kids from the high school) spent a day in the theater grinding off old bolts and sheet rocking the hallway. The Gordon-Rushville boys basketball team came in for a day and painted the interior of the theater and hallways for us. A group of community members came together one Saturday and assembled about 100 seats.” wrote Huether, in an email. “We also had a local gentleman named Fred Russell, who ended up taking a large amount of the construction on himself, doing it all for free. He wouldn’t let us name the theater after him, so we gave him free popcorn for life instead. We also had a local contractor, Jason Harding, move to town and donate a lot of work to help us get open.” (Huether, Jordan; Follow Up Questions). 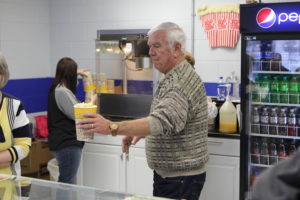 Various community groups helped raise funds for the theater, including a yard sale by the Albany 4-H club, which raised $632, a pancake feed by the Gordon Lions Club, and a meat sale and hamburger feed by Open Range Beef, which raised another $9,400 (Brant, Lauren; Gordon Theater Moves Forward…) (Huether, Jordan; Follow Up Questions). Bob Dehn of Front Range Fire Protection donated a $25,000 sprinkler system, and numerous other volunteers came regularly to help with the manual labor required of the renovation. (Huether, Jordan; Progress Continues…). Funds from the Ukena Charitable Trust and the Turner Foundation helped provide a new roof for the theater and a high-definition digital projector (Huether, Jordan; Gordon Theater Gets a New Roof). Then, in spring of 2016, the theater received a $50,000 challenge grant from the Peter Kiewit Foundation, which required the community to raise $58,224 to receive the funds. A daddy-daughter fundraiser dance, a theater seat-sale fundraiser, local donations, some local grants, and a $21,000 panhandle greater good grant helped meet the challenge, pushing the theater past its budgeting goals (Huether, Jordan; Gordon Movie Theater Receives…)( Brant, Lauren; The Power of Community…).

The theater officially opened as of February 16th of this year, and is still going strong. Without a doubt, this theater is a community theater. Not only is it run by the community and serves the community, but it was truly built by the community. Under Huether’s leadership, the community was able to rally together and build the theater that is now a source of entertainment, revenue, and pride.

And Jordan, for his efforts and success, is receiving the Emerging Leader Award during the 2018 Governor’s Arts awards. This award is “awarded to an individual artist, arts administrator, patron or volunteer under the age of 35, or someone who has made a significant impact on the arts in Nebraska in a short period of time” (Kennedy, Jared).

But it’s clear that what’s most important for Jordan is the impact he’s helped make on his community. “I’ve got two little kids, and I want them to have something to do here, something to take pride in, here in the community… [I want] the community here to thrive, I feel like [the theater] is definitely going to help bring more commerce to town, more people to town, make people want to live here, give kids something to do” (Personal Interview). 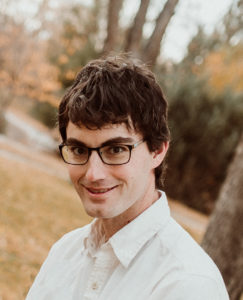