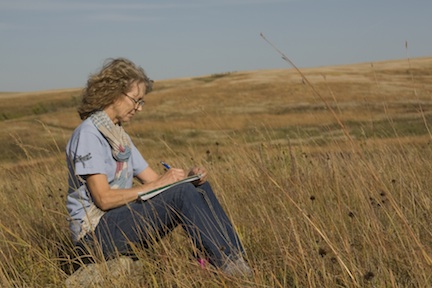 Poetry Is My Livelihood

Twyla Hansen, Nebraska State Poet, accepted the Word Sender Award from the John G. Neihardt Foundation November 9, 2014 at the Laureate’s Feast.   Read about Twyla Hansen in this re-blogging of “Poetry Is My Livelihood” originally posted January 2014.

Twyla’s Story
I did not attempt creative writing when I was young because I had no notion I could. My unlikely path to poetry—to creativity, really—was detoured by everyday life: growing up, marrying, starting a family, working, attending college as a non-traditional student. By the time I graduated with a degree in horticulture, I thought I knew what I wished to do and where I was headed. Not exactly.

I grew up on a small farm with three older brothers and without television. At an impressionable age, I lived and breathed hay bales and clover blossoms and topsoil. Because there were few distractions, I looked at things closely and let my imagination run wild. We listened to radio programs like Perry Mason, Lone Ranger and a creepy sci fi show that gave me nightmares. We attended a one-room country school K-8th. Saturdays, we drove to town for groceries and supplies, and there I learned to love the library. I would load up with books and return them the following week.

Which led me to an interest in the humanities, and literature in particular. My first professional position as a horticulturist was as grounds manager and arboretum curator at Nebraska Wesleyan University. An employee benefit was free tuition. One of the first courses I enrolled in was poetry writing taught by William Kloefkorn, who was named Nebraska State Poet in August 1982, soon after I started working there.

In that first class, Kloefkorn read some of his and others’ poems, talked and joked around, then said, “Next time you come to class, bring a poem you have written.” Which sort of stunned me: I’d never written a poem! Sure, I’d read poems—including Kloefkorn’s and Ted Kooser’s early book together, Cottonwood County, which made me think maybe I could at some point attempt writing something resembling a poem. I’ve always been a little nutty about words—a word nerd. I was intrigued with poetry and how poets craft words into phrases and lines to capture a moment or experience or person so succinctly and artfully. I thought Kloefkorn would instruct us on how to write a poem—step one, two, three—like there was a formula, recipe or checklist to follow. Wrong.

My first poems were awful, I’m sure, but I was lucky. Kloefkorn was talented at finding at least one good thing in each piece of student writing. In mine, it was a line about my brother “punching my arm silly.” The word “silly” with “punching my arm” stood out as imaginative and fresh; he was right. I learned something valuable about writing: you start where you start. You learn from others, by listening, by reading, by filling your head with words that make you want to write your own creative piece, whether it is a poem, story or essay. You study other writers to learn the what/how/why they craft their work as they do. But mostly you learn by writing.

Why poetry? Because it is a challenge, because the blank page is waiting, because you trust words, love to discover where writing can take you while abandoning yourself to the process. Which, in creativity, is everything.

Twyla M. Hansen is Nebraska’s State Poet for a five year term as named by Governor Dave Heineman. Her newest book, DIRT SONGS: A PLAINS DUET, won a 2012 Nebraska Book Award and was Finalist for 2012 WILLA Literary Award and High Plains Book Award. Her previous poetry books include POTATO SOUP, winner of a 2004 Nebraska Book Award. Her writing has appeared widely, including in literary and environmental periodicals, anthologies, a textbook and encyclopedia. Her B.S. and M.Ag. are from the University of Nebraska-Lincoln, and she is a creative writing presenter through Humanities Nebraska and the Nebraska Arts Council.