Rita and John Stinner of Scottsbluff, Nebraska, are the model citizens when it comes to volunteerism, philanthropic support, and civic leadership.

This is why the Nebraska Cultural Endowment (NCE) and its partners, the Nebraska Arts Council and Humanities Nebraska, took great privilege in nominating them as Outstanding Philanthropists. The couple will be honored on National Philanthropy Day, November 16, at a virtual event designed to recognize the extraordinary ways that philanthropy enhances lives, communities, and the world.

A couple dedicated to service and bettering the community, Rita and John embody all the characteristics of individuals who truly make Nebraska “The Good Life.” Kyle Cartwright, Executive Director of the NCE notes, “Rita and John are truly visionary in how they give of themselves and pull all the levers of the public, private and philanthropic sectors to make Nebraska a special place to live, work and play.” 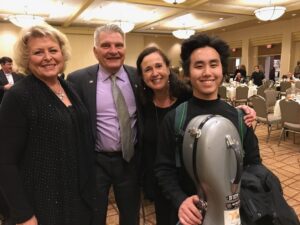 The Outstanding Philanthropist award recognizes individuals who have given to our community when it was needed most. Beyond financial support, Outstanding Philanthropists generously contribute valuable resources  such as their time and expertise and inspire others through their significant impact. The Nebraska Chapter of the Association of Fundraising Professionals (AFP-NE) hosts the National Philanthropy Day event and chooses the honorees.

Chris Sommerich, Executive Director of Humanities Nebraska, explained, “The Latin roots of the word ‘philanthropy’ boil down to ‘love of humankind.’  John and Rita Stinner demonstrate their love for humankind in many different ways, but particularly inspiring is their philanthropic support of organizations and causes.”

John Stinner is a Nebraska Senator representing District 48. Senator Stinner introduced legislation in 2021 that resulted in new funding for several major arts and humanities priorities. Among these, his efforts secured an additional $10 million for a nationally unique public-private partnership which matches private donors’ contributions to the NCE in support of the State’s arts and humanities resources. This effort will leverage the philanthropy of many other Nebraskans to each make their own impact on their community and state.

Rita has served on the NCE board of directors since 2017 and has been a key asset to numerous arts and humanities organizations, such as Choral Activities at West Nebraska Community College, Theatre West Summer Repertory, Foothills Children’s Theater, Nebraska Children Families Foundation, and many more.

“I often think of the Stinners as western Nebraska’s ‘Dynamic Duo’, said Suzanne Wise, Executive Director of Nebraska Arts Council. “Their professions are very different, but they are united in their desire to make the Panhandle and Nebraska at large a better place to be.”