When healing from trauma, the pen is mighty powerful. The Nebraska Warrior Writers program was designed to help active-duty military personnel and veterans process and express their thoughts and feelings through words.

Humanities Nebraska (HN), in partnership with Nebraska Writing Project and the Veterans Administration, launched the Nebraska Warrior Writers (NWW) in 2014. Not only is it a place to work on the craft of writing, but more importantly, it is a place to heal. Each warrior writer has a unique and personal story to tell, and many participate for two reasons: so that others will know it is okay to be vulnerable and share personal experiences; and for their own healing and enrichment. 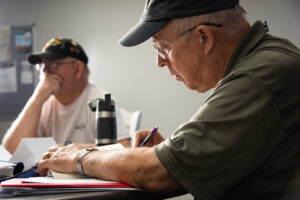 Participants in NWW come together from many different places, eras, and branches of service, yet their mission of encouraging one another through writing is universally shared. Ask any member of the group and they share that the impacts are far reaching.

Sharon Robino-West has been involved in NWW since the beginning. Robino-West experienced military sexual trauma while in the Marines.  To avoid facing the unspeakable, she poured her energies into her work and in helping others.

Sharon says that writing was cathartic and first wrote about her son’s experiences in Afghanistan until she felt safe enough to write about her own. Writing was a way to approach releasing the emotions slowly.

“The biggest impact on me is that I have really had a chance to work not only on the craft of writing but also on healing,” said Sharon. Sharing this tool with other Veterans and trauma survivors has had a great influence on her also. 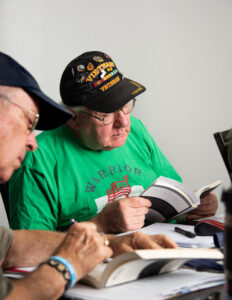 Writing is a form of therapy for those that suffer PTSD from their experiences. Giving voice to the untold stories held inside helps them find courage and ways to take back their power.

“For me, the biggest impact of the Warrior Writers has been the camaraderie and encouragement from my fellow veterans and our facilitators,” said Mary Baker, NWW participant. “The mechanics of writing and the technical pieces that we learn and experiment with each week are great too.”

Another participant, John Petelle, shared that the biggest impact for him is the feeling of community and the safe space that is there for sharing writings.

“You just have to get the thought down before it gets away,” said Sharon Robino-West, NWW participant. “We have each other, as Veterans, to bounce the words off of without having to explain anything to each other.”

She continued, “The fact that the Nebraska Warrior Writers have not only endured but grown throughout the years says a lot about the importance of the programs that Nebraska Cultural Endowment funds.”

In fact, NWW and Humanities Nebraska (HN) recently released an anthology of participants’ works, titled “From Warriors to Warrior Writers: Journeys to Healing.” Copies may be ordered through Amazon or Barnes & Noble.

This and other impactful programs would not be possible without the generosity of donors to the NCE and HN. Please consider helping to create lasting support for programs like this by donating to the Nebraska Cultural Endowment.